More than a century of history

It all started more than a century ago, in 1880 to be specific, when the Banking Central Company (Société Centrale de Banque) was created, a French institution settling in Tunisia under the name “Credit Foncier d’Algérie et de Tunisie” (CFAT).

CFAT’s headquarters were first based in Algiers and the launch of a subsidiary in Tunis was part of a large movement for the installation of metropolitan credit institutions with the definite goal of progressively removing non-French banks.

After independence, the Tunisian banking system represented an extension of the French banking structure, and was mainly tasked with funding the colonization of the country.

Unlike other banks at that time, CFAT was characterized by its mixed status with no explicit specialization, and based on the structure of its commitments, its credits mainly funded agricultural campaigns in the short term and the acquisition of real estate properties or construction and development works in the long term.

Soon after independence, public powers mobilized to address obvious deficiencies of the Tunisian banking system and to undertake a major reshuffle. As it was primarily made of private banks established according to the French Law, the banking system had to progressively be nationalized, mainly by creating the Tunisian Central Bank in 1958, uncoupling the Tunisian Dinar with regard to the French Franc and the creation of public banks. That was the time of Tunisification and concentration. Of the thirteen banks operating at that time, only six were not modified. They included CFAT which kept its French statute and remained under the control of Algiers.

Creation of the banking central campany

On June 30, 1966, the Extraordinary General Assembly of the "Crédit Foncier d’Algérie et de Tunisie" (CFAT) decided in a resolution “the transfer to a company ruled by Tunisian Law still to be created of the goods and rights, both in terms of assets and liabilities, forming CFAT’s banking operation in Tunisia.”

As a consequence, 1967 witnessed the transformation of this subsidiary into a real bank and the birth of the "Crédit Foncier et Commercial de Tunisie" (CFCT) was formally announced on June 6, 1967 with a business capital of 325,000 dinars and a formal address at 13, France Avenue in Tunis. While the Board of Directors was chaired by a Mr. Ismail Zouiten, a Tunisian national, the bank kept fully French shareholders.

1971 represents a major turning point in the bank’s history and shareholding. In fact, a young financial institution, the General Investment Bank or “BGI SA” created in 1970 by Brahim, Bechir and Rachid Ben Yedder, later called PGI Holding, takes full control of CFCT. A new board of directors was then elected and appoints Rachid Ben Yedder, then PGI Chair, in his capacity as CFCT’s CEO and Chair of the Board. The bank has since that time progressively opened up to new shareholders including the country’s most reliable and renowned businessmen, and new board members were then selected from this group. They all shared their trust in the project’s entrepreneurs and their confidence in their endeavor.

Was the acquisition of CFCT a well thought-of risk? May be. However, this risk was taken by visionary entrepreneurs equipped with tremendous faith in Men’s intangible and sacrosanct right for entrepreneurship and success. This has been a major economic principle leading to the wealth and power of the World’s greatest nations.

As competition intensified in the 1980s, CFCT strived to keep and develop its market shares. It further built on its original and innovative approach to reinforce its position as a “universal bank” by further expanding and enhancing its customers’ loyalty and offering highly competitive products and services. The bank’s efforts led to the introduction of CFCT shares in the stock exchange by the end of 1993. 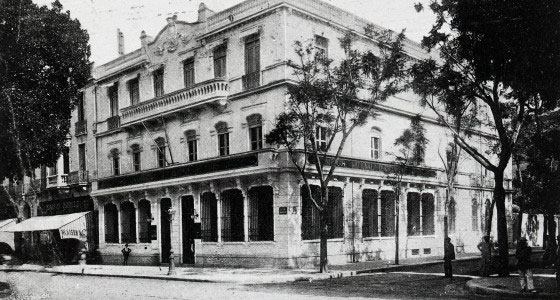 Far from being fortuitous, the change of CFCT’s name into AMEN BANK at the beginning of 1995, crowned a wise and well considered process. The Bank’s Board of Directors came to the belief then to the conviction over the years that CFCT, as an abbreviation, was not candid, neither in terms of dissonance nor in terms of concordance. On the one hand, they stumbled over translation and Arabization difficulties, on the other, the name stressed only ‘real estate and commercial’ and was therefore misleading by narrowing attributions that are in fact by far much broader.

Correcting this trajectory by putting an end to disharmony and alterity between the name and purpose of the bank was appealing, conceivable and relevant. The question was to find a good alternative, a change name. It happened that in 1977, CFCT had the brilliant idea to launch a new saving product combined with an insurance contract that proved to be very successful: the product was called “El Amen”, an Arabic term with several meanings that can be translated in safety and confidence. In customers’ minds, confusion between the bank and this wished-for product took root. In a way, Bank El Amen’s generic name was somehow created by the customers. Although immediately accepted, the bank’s managers submitted the name change to a rigorous consultative process (opinion poll, communication campaign, linguistic analysis), ending with a referenda procedure where the project was put to the vote at the annual assembly of the bank’s staff members. As the “YES” prevailed over the votes, the Board decided to select the name AMEN BANK and submitted it to the shareholders’ general assembly, which formally adopted it.

Today, the bank is more than 100 years old, and went in 1971 through a major transition. AMEN BANK has built on well enrooted banking traditions and professional practices. It is this historical entitlement that provides AMEN BANK with the privilege of seniority and distinction, a demarcating line in the country’s banking landscape.

THE NEW LOGO OF AMEN BANK

The new visual identity of AMEN BANK carries a more modern logo, combining synergy and fidelity to the values which are the very essence of the bank. The retained colors and shapes (the symbolism of the logotype) have a special meaning: Green Green, which is the reference color of AMEN BANK, has always been a symbol of hope; it is also ...

Women, partners in our success

Breaking down financial barriers for students